Home  »  Starting a Campaign   »   Should You Make The Run For Local Office? Should You Make The Run For Local Office? Running for elected office is one of the best ways someone can give back to their community. Whether they want to run for city council, county representative or school board, every candidate must begin their campaign by making the decision to actually run.

Getting yourself on the ballot takes time, effort and money. Running for office takes personal sacrifice and extracts a toll not only on you, but also on your family and close supporters.

There are many questions to ask before getting started in politics.

Here’s how to run for office and prepare for your campaign: Are you ready to get involved?

‘Should I run for office?’ That’s a question every potential candidate asks themselves at some point.

Politics isn’t for everyone. Many never even consider participating in government.

But if you’ve decided to make a difference, good for you!

So, what do you need before you run for office?

As a leader in your community, you will be in a position to bring about change and create a positive impact. Do you have the time and work ethic to get the job done? What are the goals for your elected position? Every municipality has its own particular issues. Do you know what they are, and do you have ideas for dealing with them?

One way to find out what is happening is to start attending local government meetings. Even as an observer, you will learn a lot about your current representatives and how they perform on the job. You’ll also get an idea of what local developments are happening and what may be coming in the near future.

Read the laws or bylaws that govern the responsibilities of the position you seek. If you prepare ahead of time, you will have a better idea of what to expect throughout the process.

What political office should you run for?

Are you more interested in holding an executive or legislative position? Do you want to make laws or see that they are executed properly? What position would your background and experience make the best fit?

If you have never served in government, you are more likely to succeed in a municipal or county-level campaign. Those are often the easiest political office to run for. It may not seem as glamorous or get the attention of higher-level positions, but you can make a difference at the local level. Politicians usually start winning local elections before running at a state or federal level.

What are the requirements to run for office? Many people have no idea how to run for office, so let’s start with the basics. To meet the qualifications for the office you seek, there is usually a residency and age requirement. Other elected positions may have additional requirements. For example, if you are running for judge or sheriff, there may be other training or professional experience needed.

Often the local offices to run for are based on what positions are open at a particular time. Do you think you can beat the current incumbent? If not, then you may want to run for a seat that is more winnable, so that you have a better shot later the next election cycle.

Again, the question comes down to the office you choose to campaign for and the reasons for doing so. It is unlikely you will be successful running for the United States Senate or a state governor’s seat without some experience serving at a local level.


How much money does it cost to run for local office? Money (and lots of it) is the lifeblood of politics. To run a successful campaign for office, you must raise and spend a certain amount of money to get your message out and be competitive. If you don’t like calling on friends, family and supporters for financial assistance, you better get used to it.

Consider talking with others who have previously run for a similar position to get an estimate of how much your race might cost. Put together a detailed budget as early as possible, using real vendor cost estimates. This will give you a fundraising goal that you will need to meet or exceed.

“How can I run for office without money?”, is a question that comes up often with new, inexperienced candidates. Running without money or a budget is no way to win. Ideas and a platform are great, but in the end your political campaign will be an exercise in raising money in order to spend it to build awareness and get your message out to voters.


Are you ready to build your base of supporters? Every politician needs a base of supporters. Even if you are not a political ‘insider’, you can build your own network from personal friends, acquaintances, and from people you know through organizations you belong to. 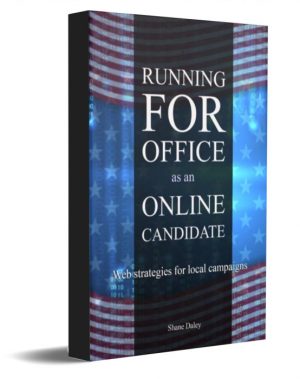 Running For Office as an Online Candidate
Download a free sample of the book. [PDF]

The smaller the race, the important personal relationships can be. Local races are often won by just a handful of votes, with victory often coming down to the candidate who gets the most supporters to the polls. Personal connections can be a powerful motivator in getting out the vote.


Is your family ready?

A campaign not only involves the candidate, but also his or her family. Your home will be become a mess with campaign literature, signs, and documents. The process will stress out your partner, and the needs of your children will be set aside. Talk with your family and friends. Let them know what changes the campaign will bring. Having them understand and on board with your decision will help during the most demanding times.


Do write-in candidates ever win? The most important part of a write-in campaign is informing the public of how to cast a vote for you. Because voting for a write-in or sticker candidate is different than a typical vote, you must carefully inform voters exactly how they must vote so their votes are considered valid. The correct name needs to be used, and where the name is written or the sticker is placed is critical to casting a write-in vote for the proper position.

Write-in candidate requirements vary from state to state. It is a common requirement that write-in candidates be registered as official candidates. Don’t assume that you can just run a campaign asking for voters to write your name on the ballot without knowing for certain that this strategy can even succeed.


Are YOU ready for the realities of political campaigning?

A local political campaign can be mentally and physically challenging. Are you ready and able to commit the time and personal resources necessary to participate? Do you have a thick skin and can weather criticism? Canvassing, phone calling, fundraising and events can take up an enormous amount of time and energy.

Who is running for office in your area? Find out who is on the ballot. Do you know their strengths and weaknesses?

Do you have the tenacity to ‘bring it’ through Election Day and beyond?

Anyone who has ever decided to run and serve has dealt with these issues. Rest assured that whether you win or lose, you will be a changed person after the election.

If nothing else, you will come away from the experience with a greater appreciation for the political system and all that goes with it.

Once you’ve made the decision to it, the next big question is…


How do I run for local office?

First, you want to know what offices are available and open to serve. It doesn’t make sense to start a campaign during the first year of an incumbent’s term.

Local offices to run for during a first campaign may include positions such as school board, town board or local board. You typically don’t need as much experience. It’s a great way to work yourself to higher to higher positions.


How to file for candidacy

Assuming you’ve met the eligibility requirements, you will need to submit your petitions, application forms, and fees by the proper deadline. If you don’t, you won’t appear on the ballot. In most cases, you will file your paperwork with your secretary of state’s office.

Reach out to your local political party. They can give you access to resources such as voter demographics, address and email lists, and other resources.

Try reaching out to politicians in your party who have been elected. Work on building your professional political network.


Get your campaign finances in order

To accept any political donations, you’ll need a checking account in your campaign’s name. All income and expenses will need to be tracked and reported, per applicable law.  A campaign committee is a legal business entity you will need to create and register.

You will also need way to take online donations and a campaign website through which to accept them. Digital campaigning is growing every year, particularly for local races. You will also need to budget for your digital advertising.


Start raising money and put together a fundraising campaign strategy

Fundraising will need to start as quickly as possible. If you don’t like to ask people for money, you can practice family and friends. Soon enough you will be asking others for help.

This is where your networking starts to pay off. Connect with large contributors to your party. Even on a local level, there will be individuals, companies and organizations who consistently donate to other candidates with similar platforms. Reach out to them.

As your campaign grows, you will start building your own donor database for fundraising and communications.

Past candidates can provide you with their own donor and volunteer lists. They can also help you navigate and avoid problems that they may have had during their run. Even if you think you are qualified, don’t run your own campaign. Get someone else to do it. You, as the candidate, should be out getting voters to know who you are, on the phone (doing that fundraising thing), attending events and meeting with the press.

The campaign is a team effort. When everyone works together, it can go a long way toward election victory.

Know the important issues and be prepared to speak on them and answer questions. You also need to know your opponent’s positions. This will help you put together a campaign strategy to differentiate yourself from your opponent.

Prepare for public speaking and events


Interact with your community and online

This is the part where you interact with the most important people – the voters. Interacting with the community (in real life) means knocking on doors during canvassing, making phone calls, and interacting with potential voters at every opportunity.

In the online realm, you will reach voters through social media, email and online advertising. Before your campaign, you should have cleaned up your social media profiles.  Share news, updates and announcements. Use a lot of photos and video where you can. Vet all the content you share. Double-check anything you post before it goes live.

Use your interactions to bring people into the fold. Work to get contact information, email addresses and social media follows. Use this information to reach out for donations and support.

In the end, you’ll need to pull out all the stops on your GOTV efforts. The more people you can reach, the more effective your outreach will be.

A well-executed strategy will give you your best shot at success on Election Day.